Dan Murray was featured in Episode 5 of the “Tableau Wanna Be” podcast hosted by Matt Francis and Emily Todd Kund. The podcast focused on the previewing TC14 as well as an in-depth interview with Murray about his book, traveling the globe and the upcoming conference. You can listen to the podcast below or read through the summary of Dan’s interview immediately following.

Emily sat down with Dan Murray at a Starbucks in Washington D.C. to discuss a number of Tableau topics, including:

Why Write a Book? 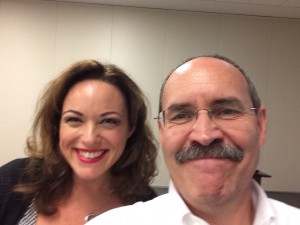 Emily opened her set of questions by asking Murray why he wanted to write a Tableau book in the first place. Murray explained his desire to write a data book began six years ago, but folks like Tableau and Microsoft weren’t interested in funding a book and a book tour at the time. Fast forward a few years later. Dan was contacted by Elissa Fink from Tableau who asked if he still wanted to write a book. Fink connected Murray with publisher Wiley and Dan began writing “Tableau Your Data!”

The next few questions were focused on the US and European “Tableau Your Data!” book tours:

For Murray, the most rewarding part of the tour was meeting so many people he wouldn’t have met otherwise. He enjoyed seeing the enthusiasm people had for Tableau. Europe was especially interesting to Murray because Tableau is just now catching on.

“In Europe in particular, it’s like the US four years ago. It’s the crazy people there that are really loving Tableau … it’s a lot of fun.”

Concerning audience response when finishing a talk, Murray laid out an interesting landscape which broke audience members into two categories. There are those who love Tableau, and then there are IT guys who are trying to make it work in their environment. Murray detailed his conversations with the latter, expressing how they try to make Tableau work with their old technology. He summed it up perfectly in this quote:

“One of my favorite questions is ‘how do I do cubes with Tableau?’ That’s a little bit like saying ‘how do I build buggy whips for my car?’”

As far as the tour objective, Murray said his goal was simple: He wanted to meet as many interesting people as possible. He explained that the influx of new Tableau users and partners are adding many new perspectives into the Tableau community. Dan and Emily carried the idea of new perspectives into the book publishing market. They discussed whether or not it was possible to oversaturate such a market with Tableau books. Murray pointed to examples like Microsoft Excel books, of which hundreds are published each year. Concerning Tableau, Murray welcomed to the growing number of books:

Murray and Emily agreed that with so many different perspectives, there was plenty of room for many Tableau books in the future. Each book appeals to different types of users and have their own intrinsic value. Speaking of books, Murray also mentioned that he’ll be working on his second book shortly.

Given that Dan has been to every US Tableau Conference and most worldwide, Emily asked Dan what he was looking forward to most at the 2014 Tableau Conference. The answer struck a similar tone that of his book tour: He enjoys seeing people he almost never sees.

He recounted meeting Andy Kriebel at the very first Tableau Conference and how they’ve been friends ever since. He’s made new connections at every conference. Murray went on to say that he really enjoys the customer sessions. Of course, Christian Chabot’s keynote speech is always great. When asked about tips for beginners, Murray recommended staying after sessions ended to ask genuine questions to the presenters. For seasoned pros, Murray recommended meeting as many new people as possible.

Emily closed out her interview with Dan by asking him what his three wishes for Tableau or data visualization would be. The only condition was no unlimited wishes. Murray’s choices were:

Murray and Emily agreed that the smart folks at Tableau have surely been thinking the same things, and are confident that the software will only get better as time goes on.