In case you missed it, the 2nd edition of Tableau Your Data! is nearing release! This new edition features several updates and expansions to the best-selling guidebook which are current to the latest version of Tableau, Tableau 9.2. To promote this new release, author Dan Murray is hitting the road again for an extensive U.S. book ...
Read More »

Dan Murray Gearing Up for a Big Q1 and Beyond

Last year was huge for “Tableau Your Data!” author, Dan Murray. With the book picking up steam across the world, he spent a good chunk of his time on the road for several book tour stops across the US and Europe. Oh, and let’s not forget that he presented at the Tableau Conference and was ...
Read More »

Dan Murray reviews a busy year in the world of data. In many ways, 2014 was a big and different year both for myself and for the entire InterWorks team. The team continues to grow and expand. I received recognition as a Tableau Zen Master, and was recognized by Tableau Software at Tableau’s first Partner Conference ...
Read More »

TC14 may have just ended, but the Tableau events keep rolling. Their newest series of events focuses on building data-driven organizations through the power of data visualization in Tableau. The events will feature Tableau’s latest Zen Master, Dan Murray, who possesses extensive and diverse experience on the subject. The ultimate goal of each event is ...
Read More »

Dan Murray was featured in Episode 5 of the “Tableau Wanna Be” podcast hosted by Matt Francis and Emily Todd Kund. The podcast focused on the previewing TC14 as well as an in-depth interview with Murray about his book, traveling the globe and the upcoming conference. You can listen to the podcast below or read ...
Read More »
Tableau Your Data! shows you how to build dynamic, best-of-breed visualizations using the Tableau Software toolset. 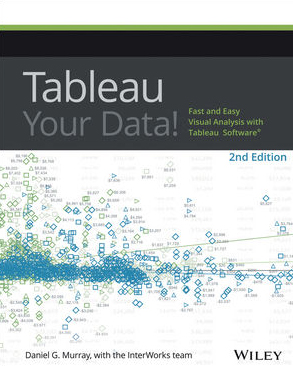